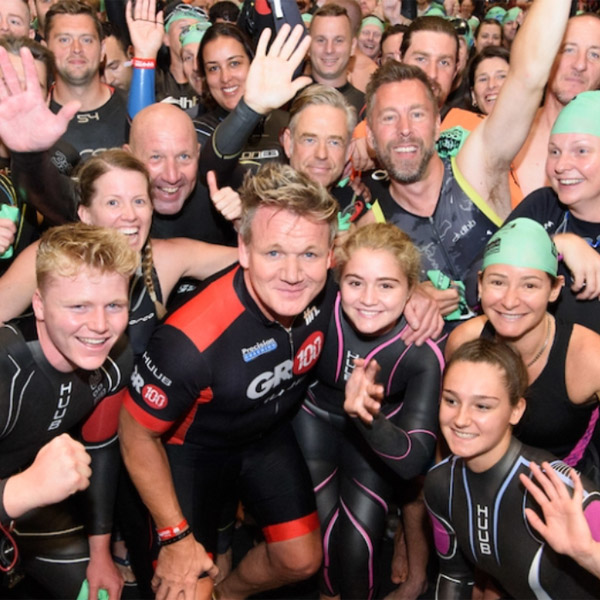 Precision Coaching is very proud to be the coaching partner to Team Ramsay.  We have provided the infrastructure and training support to the team which at one point consisted of 100 athletes, many complete novices. They worked towards competing at 70.3 IRONMAN Staffordshire along with Gordon and Tana Ramsay as part of their charitable foundation in aid of Great Ormond Street Children's Hospital (GOSH).  Their aim is to raise the largest possible sum for GOSH.

2015 was the first year for the foundation and it was a great success, with some members returning to race again in following years as part of the team. Building on the package offered in 2015 we provided the GTR100 athletes with a semi-bespoke training program; bespoke kit; and a series of coaching (pool, bike, open water) and social days, where the athletes have the chance to be coached by and listen to some of the best athletes in the world - Olympic medallists, World Champions, and Kona legends.

In addition to the coaching provided there has been an incredible support package from world class physios to bike and wheel building to discounts with a major retailer on kit and accessories; and full time support from the GOSH sponsorship team. We put this package together to help all the GTR100 athletes to succeed both physically and in raising a massive total for Great Ormond Street Hospital.

keep up to date

Register your email address for updates and offers.

We use cookies on our website to give you the most relevant experience by remembering your preferences and repeat visits. By clicking “Accept”, you consent to the use of ALL the cookies.
Cookie settingsACCEPT
Manage consent

This website uses cookies to improve your experience while you navigate through the website. Out of these, the cookies that are categorized as necessary are stored on your browser as they are essential for the working of basic functionalities of the website. We also use third-party cookies that help us analyze and understand how you use this website. These cookies will be stored in your browser only with your consent. You also have the option to opt-out of these cookies. But opting out of some of these cookies may affect your browsing experience.
Necessary Always Enabled

Performance cookies are used to understand and analyze the key performance indexes of the website which helps in delivering a better user experience for the visitors.

Analytical cookies are used to understand how visitors interact with the website. These cookies help provide information on metrics the number of visitors, bounce rate, traffic source, etc.

Advertisement cookies are used to provide visitors with relevant ads and marketing campaigns. These cookies track visitors across websites and collect information to provide customized ads.

Other uncategorized cookies are those that are being analyzed and have not been classified into a category as yet.